Updated 7th January 2022
Happy New Year!
Following the lifting of covid regs allowing larger groups, our Weds and Fri classes merged few months ago
Kukua Weds evening class - 7pm till 9pm
A new Kumaasi (new beginnings) class
Will take place at the hall once a month starting Sat 28th Jan (see tab above)
Suitable for complete beginners, improvers and folk who already have a sound grasp of djembe but who wish to work on technique and self improvement at a more gentle pace


Kontaani means 'HAPPY' in the West African language of Mandinka

We are an eclectic bunch of lovely folk from all walks of life with one common bond - African Drumming!

There are now three main groups under the umbrella of KONTAANI DRUMMING GROUP -
I also run one off group workshops, events (Kontaani Drumfest) and short courses in African drumming. I am also happy to offer 1 to 1 lessons in your own home.
We don't profess to be authentic 'Djembefola's' but we have a great deal of fun drumming together for pleasure and relaxation. Most of the rhythms we play are based on the traditional music of West Africa which at times we may 'tweak' to fit our ability. That's not to say we don't take our music very seriously!

I started Kontaani in 2010 due to a distinct lack of djembe drumming tuition in the Macclesfield area. Kontaani was born from 4 Langley friends who drummed together on a Sunday afternoon. We took it in turns to host the Sunday gatherings in our own terraced homes.

We moved to the local village hall after an elderly neighbour said he thought bombs were dropping on Langley!

I opened up our drumming group to any like minded person in the area, or beyond, interested in joining us to just simply DRUM!
From the most committed players at the time, I formed Kontaani Drumming Troupe - the band.
The Kuku Weds class has since grown - members have come and gone through the years - some have gone on to more advanced classes but many have stayed and been with us from the beginning. We currently have around 60 members between the 3 groups, although not all drum at once!
No experience is necessary. We welcome beginners to advanced players.

Our 2 hour Kukua classes are on Wednesday evenings in Langley:-

Our 3 hour Kumaasi classes are once a month on Saturday day time in Langley:-

Every so often we have a tutored workshop when we invite specialist teachers such as Sidiki Dembele, Iya Sako and Jamie Riley of Drumroots to come along to train us in new rhythms and techniques.

The Kontaani performance troupe - the band, train every Thursday evening The members are already very experienced in performing in public and are a semi-pro troupe. They have been chosen not only for ability and talent, but for complete commitment to Kontaani.  This group is currently closed for applications

Our band played our first public 'gig' as Kontaani on the 11th December 2010 at the Langley Review which went down a storm.
We have gone on to play gigs at:

We continue to play regular gigs, private parties and festivals in the area and beyond - far too many to keep listing!

As the Kukua classes have become more and more popular we occasionally hold performances for family and friends to showcase our talents. This ensures all members have the experience of performing to strive towards. However, performing in public is not compulsory. No one is under any pressure. 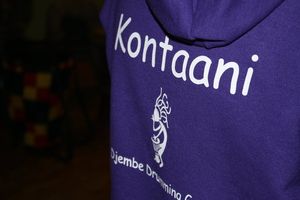 Each of our beloved drums started life from a living tree and a living creature. The djembe's are made usually of goat skin and the dunduns are normally cow hide. The skins are the by products of the food chain.
With this in mind our drums are very precious and are treated with the utmost respect.
I read that the drum makers thank the tree prior to cutting it to make drums.  I understand that they also believe each drum contains 3 spirits - the spirit of the animal, the tree and the drum maker! So -  the trees and animals used to make our wonderful drums live on and to the master craftsmen who make these beautiful instruments - thank you!

If you are thinking of purchasing a drum - please contact me and if I have not got one suitable for you I will put you in touch with other fair trade suppliers.
Thank you
Marie x